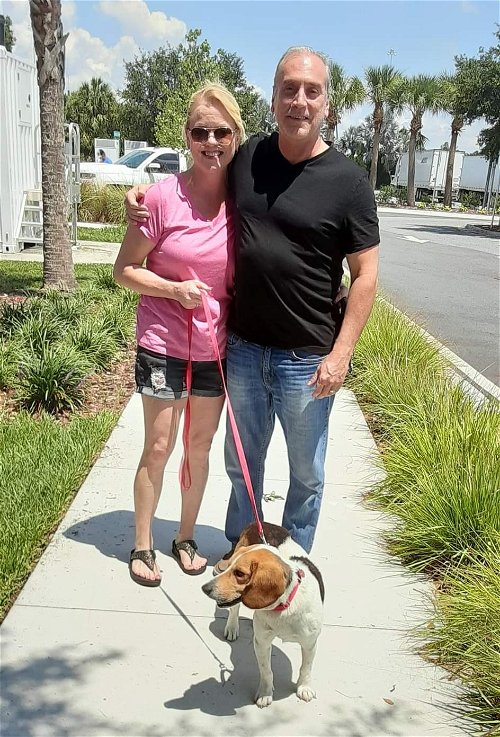 ***UPDATE*** We would just like to share that Rhett continues to do very well with the other dog he is living with (and there are 7). He is also making straight A's in potty training and all urinary issues have cleared up after his course on the antibiotics. He is very affectionate with his people and does the cutest little thing with his front paws where he is asking for affection but not actually pawing you. If you stand before him he will often sit back on his haunches asking for a belly rub. He loves watching for the squirrels up in the trees. He is such a beautiful dog and deserves a beautiful life!

Rhett is a lovely beagle boy from Louisiana. His previous life must have been one of neglect. His skin and coat were in bad shape, his nails were atrocious and he was suffering from a urinary tract infection. But with excellent veterinary care,  medications and good nutrition we are bringing back this gentleman beagle's luster. It is a joy to see him happily running from tree to tree barking at squirrels. Unfortunately that has to be curbed for a while as he was heartworm positive and is going through his activity restriction now after the injections. We'd like to share that Rhett may have suffered some fear and trauma at the shelter as they put many dogs in a large pen together there....and sometimes there have been really bad results. Rural shelters with little funding do the best they can and we do understand that. In his foster home, Rhett has learned to cohabit quite well with the regular dogs, but if new dogs come in he can be a little growly, giving them lots of warnings. Eventually he determines that they mean him no threat but it takes a while. Rhett is so grateful for gentle rubs and affection. He does not have a tendency to get on furniture but knows there is a chair in the bedroom he can make his bed and it is a delight to him to curl up there. He is generally calm and rarely barks.

Other Pictures of Rhett II (click to see larger version):